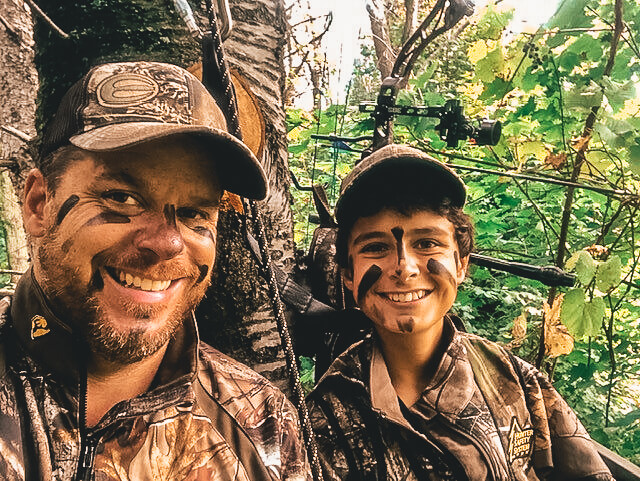 Born for the Hunt: Getting to Know CenterPoint’s Kevin Casey

Some people were born for this — and by “this” we mean being part of the ancient and never-ending line of hunters. That’s how it was for Kevin Casey, CenterPoint Archery’s product manager.

Kevin recognized his passion from the very first time he picked up a bow in Boy Scouts.

Some of us are born into hunting families. Some come from a long line of men and women who live and breathe the woods and game. Not Kevin. When he was a boy, no one in his family hunted or fished. Still, it was in his DNA. While other kids played video games, he went afield with a BB gun, pretending he was on an epic hunt.

Maybe that sounds similar to your story? There are many ways to end up a committed crossbow hunter, and they’re all good. 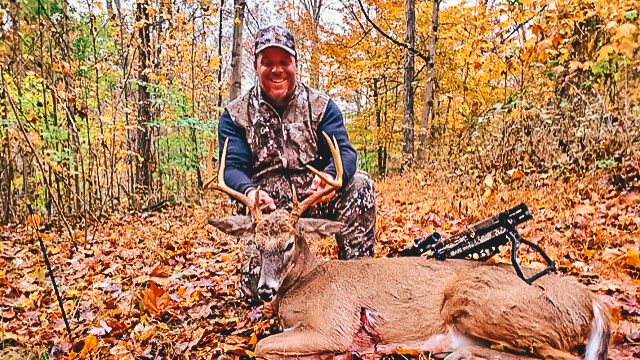 Kevin Casey, CenterPoint Archery product manager, was introduced to bow hunting when he was in his 20s. Kevin harvested this buck with a CP400 in October 2020, at Hupp Outfitters in Ohio.

Kevin didn’t get his first solid taste of bow hunting until he was in his 20s. That’s when he met his brother-from-another-mother, Les.

An avid sportsman, Les grew up in a hunting family and he passed his respect for the sport on to Kevin. First, he got Kevin up to speed on guns. Then, when he thought he was ready, Les handed Kevin a compound bow. Just a few arrows in, Les saw that Kevin was “lethal with it” and told him to put the shotgun away for good.

“I was excited to have (a bow),” said Kevin. “I love how it feels to let the arrow fly. I’d grown up watching Wild Kingdom and Fred Bear. Joining that tradition felt so cool and it still does.”

Kevin took a bow hunter safety course the following fall and harvested his first doe shortly after. In his second year, he got his first buck. Now, after years of regular hunts — still often with Les and a growing crew of like-minded hunters — Kevin’s come back with turkey, black bear, and more. In the process, he earned his New York State Guide’s License and passed his passion on to others. He became the mentor he’d wanted as a boy.

And that’s a good thing, because now Kevin has his own kids — and they’re archers, too.

His eldest daughter shot competitively and hunts. His son competes and hunts with a bow. And his middle daughter, Kevin suspects, would have outshone them all if she’d stuck with it.

Kevin recalls when his eldest, Paige, was just a kid. They’d visit the archery shop together and, each time, the owner would put a bow in her tiny hands. She lacked the strength to draw it but kept trying. When she finally could, the owner celebrated by giving her the bow as a gift. Kevin offered to pay, but the store owner wanted to bring Paige into the crew.

“When she outgrows it,” the owner said, “just pass it down to another kid.” He saw that gift, and her enthusiasm, as invaluable.

And Kevin did as instructed, growing the indomitable crew of bow hunters one by one. 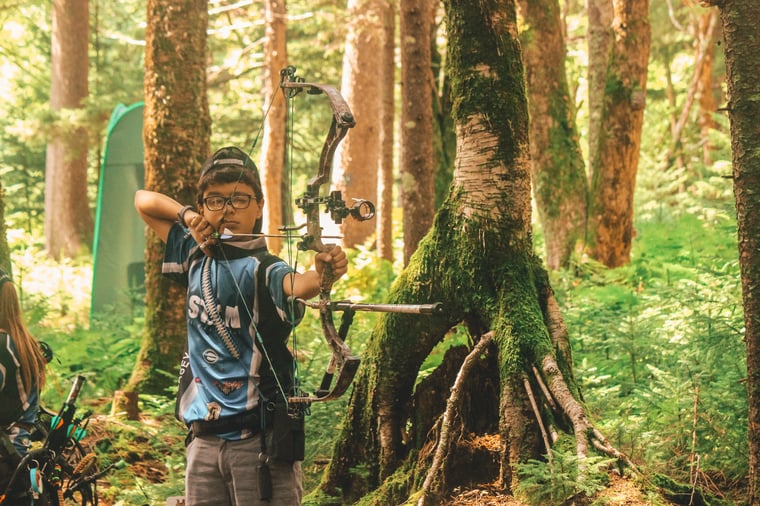 Archery is a family affair for the Casey crew, with each of Kevin's children enjoying competitive archery and bow hunting.

“I’d bring my kids out into the woods so they could see what I was talking about,” he says. “What I quickly discovered was that having someone half your size along means trading your perspective for theirs. My kids would see things I’d miss. The questions they asked made me stop and think. It gave me the opportunity to appreciate the things I’d otherwise take for granted.”

Kevin’s kids have assisted with putting in food plots to improve the land. They took their hunter safety courses and grew proficient with the weapons they chose. No surprise, all three use a bow because they feel connected to them. They like the challenge and the skills they need to outwit game.

You might say that they were born for it, too.

Assisting with establishing food plots and gaining proficiency in archery from a young age, Kevin's children were born for the hunting lifestyle.

The Right CenterPoint Gear for the Hunt

These days, Kevin takes as much opportunity as he can to hunt, whether that’s a couple of hours here and there after work, a weekend with the boys, or during an annual 7 to 10 day trip somewhere special. This year, he’s headed to Quebec to hunt bear.

Regardless of how long Kevin is out, however, he’s using archery equipment — even in gun season. He got his first bear with a Sniper Elite in Quebec, however upstate New York Is where he hunts most often.

The new Wrath 430 will be his go-to crossbow this season for any out-of-state hunts . On top of it being an all-around keen weapon, it’s also the first that CenterPoint designed and released under Kevin’s leadership. He also calls out the CP400, which he’s used on many successful hunts in Ohio.

“When I see CenterPoint customers show off their pictures on social media — I got this deer, or whatever — that sharing completes the celebration of the hunt for me,” he says. “It brings everyone into the family.” 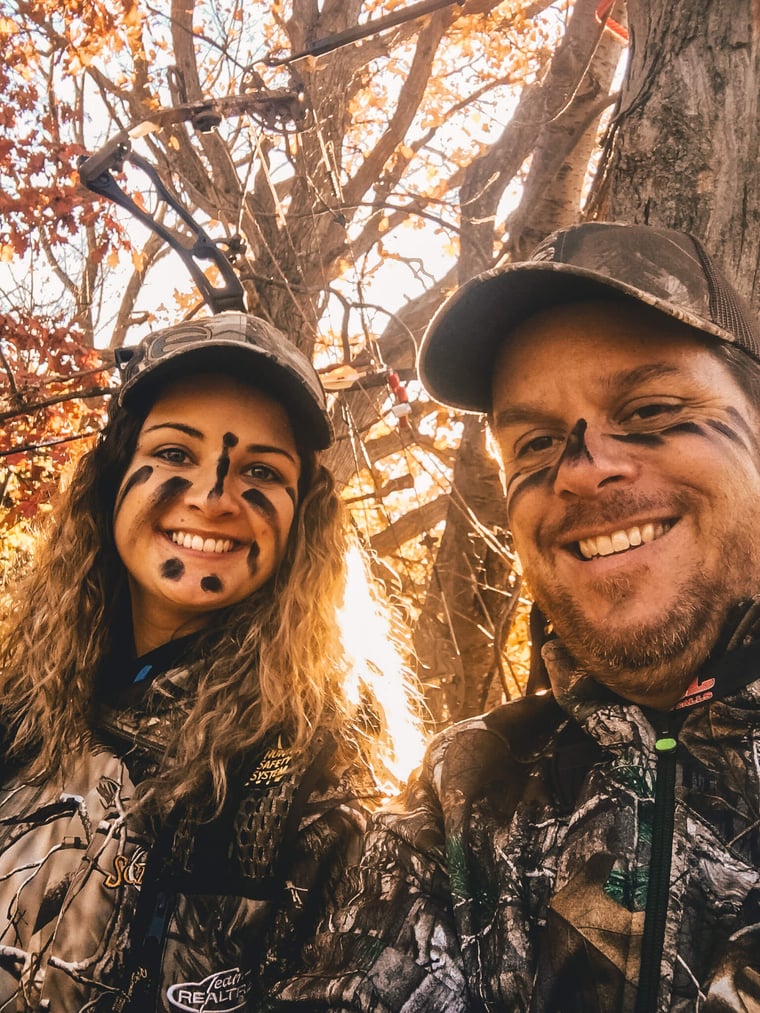 For Kevin Casey, (right) CenterPoint Archery Product Manager, hunting isn't about killing animals; it's about being part of a family of hunters.

Kevin stresses that hunting for him is not about killing animals; it’s about the experiences he has outside as part of the wild world.

“It’s about having a chipmunk pop up on the toe of my boot. Hearing the sounds of the universe waking up in the morning. The breath of the deer blowing in the distance. You can’t see that from your couch. That’s priceless and that’s what I love.”

“People hold out for this target deer, this trophy, and lose sight of why they’re out there. If you just want something to brag about, you’re missing the point. It’s about the preparation and the camaraderie in camp as much as the hunt.”

“The trophy I value most is being part of that family of hunters.”

How did you get into archery? Who were your mentors? Which hunting experience is your most valuable trophy? Send us a DM on Facebook or post on Instagram using #BornForTheHunt to share your stories and photos.

This past spring, roughneck rocker Tim Montana put the all-new CenterPoint Wrath 430 through a...
Read More

Join CenterPoint’s insider-only email list and reap big—and immediate—rewards. Not only will this...
Read More

CenterPoint Archery Gifts for $100 or Less

Christmas is around the corner, and if you’re looking for last-minute gifts for the bowhunter in...
Read More