Couples that hunt together, stay together. It’s no coincidence that Cupid is an archer, too!

Seeing as how it’s Valentine’s Day, we figured nothing would be more romantic than a few stories about couples that share our passion for the hunt.

We hope you enjoy these four stories and find yourself a shared love of hunting. 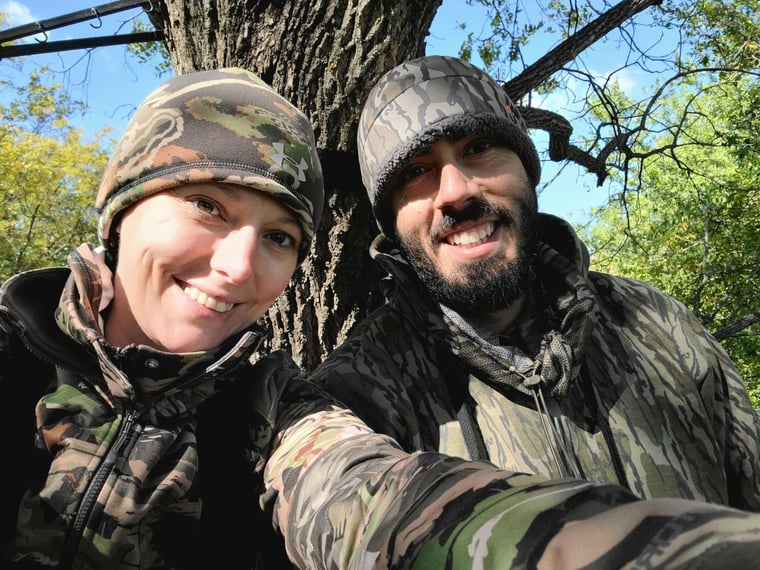 Matt and Jen met two years ago. On one of their early dates, Jen invited Matt to the shooting range. And you know Matt became hooked on more than just archery that day.

Matt had never hunted before, but — partly to spend more time with Jen and her son, Landon — he quickly learned to love it. After that first season, Jen bought Matt a new bow, setting him up to make his mark.

And he did! The pair got married and started managing their land for hunting. Matt took the property’s first harvest, and Landon got his first deer on the land, too. Matt and Jen are just starting their journey as a hunting couple, but they have already planned for a future hunting their property together.

The Newlyweds – Charlie and Linda Meyling

Charlie Meyling grew up an avid outdoorsman, harvesting his first deer when he was 16. When he met Linda, however, she was a hiker more than a hunter. Charlie introduced Linda to hunting on their sixth date, and a little over a month later, she harvested her first buck. This success lit a fire in Linda for the hunter’s life.

"I never hunted before but listening to Charlie tell his tales of hunting and feeling the excitement and emotion he expressed when he spoke about anything hunting spurred my interest," explains Linda.

Fifteen months later, Linda became Mrs. Meyling. Over that first Christmas as a married couple, Linda found a new rifle under the tree — a sign of the hunting adventures to come in their future! 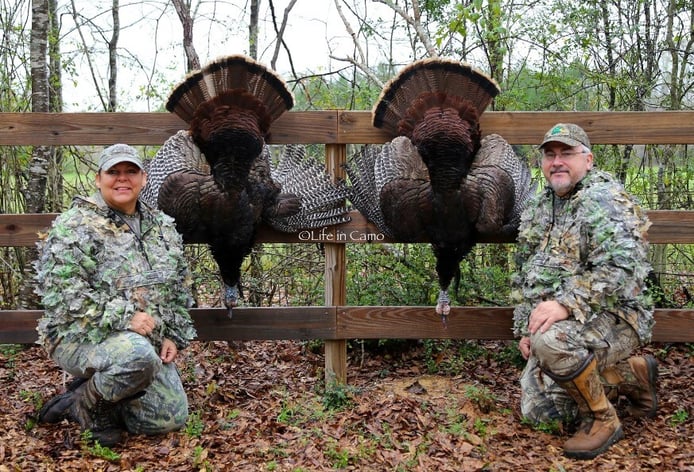 Nancy Jo grew up a competitive equestrian. Her husband Richard spent every spare day hunting or fishing. When they met, however, Nancy Jo was adamant that she didn’t want anything to do with his hobby. Thirteen years full of lonely days later, she finally accepted his invitation to join him on a hunt.

Richard's mentoring made that first trip far more appealing than Nancy Jo expected. "In one perfect hunt, we now had something in common; an interest we could share," Nancy Jo said.

Hunting didn’t bring Richard and Nancy Jo together, but over 16 years and counting, it has become their way of life.

The Well-Traveled – Dreabon and Pam Joiner

Before meeting Dreabon in 1969, Pam had never hunted. It was in planning for their wedding that Dreabon shared that hunting was his way of life — and that it was vital to him.

Pam explained, "It was clear to me that I could either join him and learn how to hunt, or stay home by myself, or I could try to change him. Changing a person never works well, and I didn't want to stay home alone. So, I decided to learn how to hunt, and fortunately, I enjoyed it."

The adventures they’ve shared are a hunter’s dream. And the bond they formed proves it: couples that hunt together, stay together.

Tags: Crossbow Hunting
Back to Blog

How to Prep Your Crossbow Before Sighting in for Hunting Season

Hunting season is around the corner and now is the time to prep your crossbow. Ideally you’ve kept...
Read More

The reviews of the Wrath 430 are pouring in and they confirm what you’ve long known: CenterPoint...
Read More

How to Choose the Right Crossbow for Your Budget

At CenterPoint Archery, we know every archer comes from a different financial place. However, we...
Read More